The name ‘’Society for Theoretical Psychoanalysis (STP)’’ is misleading and does not signify the actual activity of the society, which is why it breaks the 10th article of the Association law. Furthermore, STP defines its activity unsuitably.

Their activity is not defined in accordance with the facts, because the STP is a philosophical society and not a psychoanalytic association/society. Organizations that are not part of a certain field cannot develop the same field’s theory.

Sociological and philosophical usage of psychoanalytic theory, application of theory to other fields, and setting up connections with psychoanalysis are not the matter at issue. The matter at issue is the name of the STP, and its definition of its own activity, which are diametrically opposite to one another.

The right to public information (about what psychoanalysis is) and the Association law of the Republic of Slovenia (especially those with the status of association in the public interest, among which the STP is) precede the STP members’ self-understanding of their own activity. That is especially the case here, because not only are the definitions of activity and naming contentious at best, they are also in opposition with psychoanalytic theory of Lacanian orientation and their international organisations.

Concerning the STP’s actual activity, more suitably naming would be:

● In the last 35 years, the STP has acquired state financial funds for publication of monographs of their articles, unauthorised translations of psychoanalytic monographs, and the journal Problemi (receiving 1.458.757 EUR of taxpayers money in recent years).

● Anyone who has not been analysed themselves or is not engaged in psychoanalytic practice, cannot name themselves psychoanalyst. Philosophising about that is misleading;

In order to avoid further misunderstandings, two necessities are the change of naming of the Society for Theoretical Psychoanalysis, and a clear definition of its activity that will be in coherence with activities of the organisation in question. 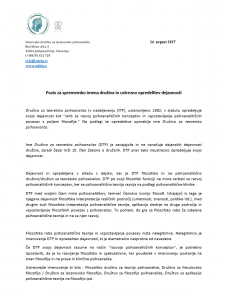