The event will be moderated by Nina Krajnik.

The conference of Mexican psychoanalyst Carlos Gomez Camarena will explain what antiphilosophy means for Lacan and how one could develop it for psychoanalytical practice. It will specifically emphasise how antiphilosophical operations have clinical consequences to the extent that Lacan mentioned anti-philosophy as one of the four fundamental knowledges for the Clinical Unit at Vincennes University in 1975. In his seminar on Transference Lacan reminds us that every analysand is “a little philosopher”. When Lacan fully plunges into the waters of philosophy, he does that only to avoid the disastrous mistakes of the so-called post-freudians. How is it possible that those psychoanalysts who are not interested in philosophy could perform the worst errors of philosophers?

We will argue that anti-philosophy is a key concept to re-read Lacan in a clinical way. We will also approach anti-philosophy not as a knowledge but as a series of operations performed in the core of an analysand’s discourse. These anti-philosophical operations could be founded in Pascal, Marx, Descartes, Socrates, Kierkegaard, or Wittgenstein, but they could only be disclosed by means of Freud or by either a mathematical, poetical, or religious element.

The event is free and open to all. 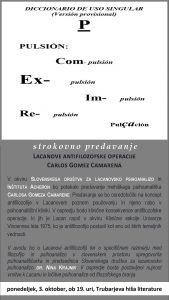